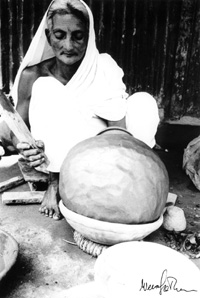 “Grassroot Bengal” here, on this webpage, refers to my commitment to folk art, in tunes and colours, as taught to and practised by children and young people in the Bengali region. The teachers are local.

This commitment has a long history: it started with my hearing old spiritual and subversive Baul songs at a pilgrimage place called Kenduli, north of Kolkata, in 1992. My conclusion: ”This form of music must not vanish.”

In 1998, hearing very poor Muslim women singing similar songs on an island in Northern Bangladesh, my conclusion was the same: ”This music must not vanish, and it is also mine.” But this singing will, of course, vanish if the deep feeling vanishes.

My question to myself, from 1998 onwards, has been how to nurture that deep feeling and help preserve the music. It had to be through the teaching of children. For that to happen, teachers and places were needed.

The wish to establish some sort of informal archive of what existed once upon a time co-existed, in me, with the main wish to preserve the music by having children learn it.

There is a way to do it. It has got to be collective.

Supported by other Norwegians, in 2004 I began my grassroots efforts in support of the regional song traditions as taught to Muslim and Hindu children in Northern Bangladesh. This is work for peace, really. The fruits of those efforts remain, and they are many despite an unfortunate recent disruption of our efforts.

There is now a new beginning, a New Song, so to to speak, among musicians and young people in the same northern region, and this time I am more experienced – linguistically, mentally, and sociologically. I have known the musicians and master teachers since about 2009. They are still devoted to the work.

We need money to buy instruments. And we need to establish a basic financial support system for our hard-working teachers as well as for assistance to some of our young learners. In times of dire need, we may need more than this.

In Kolkata, a Trust called Earth-Care with Art has been established, with a house, Tori-Maa, in Tollygunje. The house was opened in March 2014. Tori means ”boat”.

Our artistic efforts in India have so far focused on painting and yoga, in weavers´ villages in Nadia and in our (slum) neighbourhood in Kolkata. The children are slowly learning to make their own pigments from berries, plants, fruit, coal.

There are strong connections and exchanges of experience and vision between the musicians/singers in northern Bangladesh and our devoted organizers and teachers in Kolkata and Nadia. The most devoted ones cross the border to learn and to teach. They may stay for weeks or even months.

This is one effort, east and west of the border, by people all speaking Bengali, with one goal: art, awareness about nature, and community – close to the Bay of Bengal and rising waters.

Small newsletters, photographs, and maybe some video clips will be shown on this webpage along the way. You are invited into ”the boat.”